India will play against New Zealand in the first Twenty 20 match allotted for Trivandrum. The match will be held at Greenfield Stadium Karyavattom on November 7, 2017.

Earlier it was announced that Sri Lanka will be the opponent against India and the match will be held on December.

Trivandrum will be the second venue to host an International Cricket match. BCCI has approved Greenfeild Stadium as the venue for T20, but the date and team of the match has not been confirmed. As per the international cricket schedule, Australia, New Zealand and Sri Lanka are the teams which will play  against India this season. 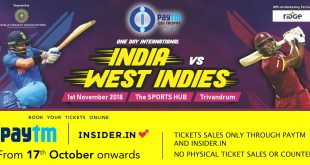